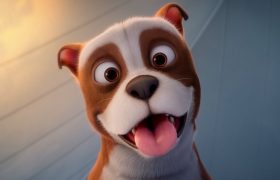 Ric Catches Up With This Heartwarming Film’s Star Logan Lerman, Director Richard Lanni and Stubby Lookalike, “Stubs”. Before he was a hero, Stubby was homeless, unwanted, unwashed and unloved, scrounging for scraps on the streets of New Haven, Conn. in 1917 – Until he was taken in by Private First Class Robert Conroy of the […]