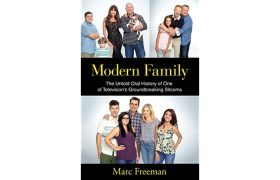 An oral history, with the full participation of cast and crew, of one of the most popular sitcoms in television history. Since premiering in 2009, the groundbreaking television sitcom Modern Family has garnered tens of millions of devoted fans, earning 75 Emmy nominations and 22 Emmy Awards, including five in a row for Outstanding Comedy Series (one […]