Tag: The Surprise Story of the Three Little Pigs at Thanksgiving 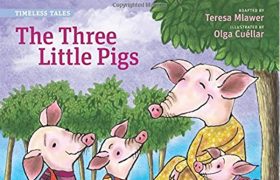 This is a modern-day story told from the wolf’s perspective who tries to borrow a cup of sugar from three pigs. He tries to convince them he’s not a pig eater because he’s not the same wolf they had read about in other books.It wasn’t until he smelled the aroma of Thanksgiving cooking coming from […]